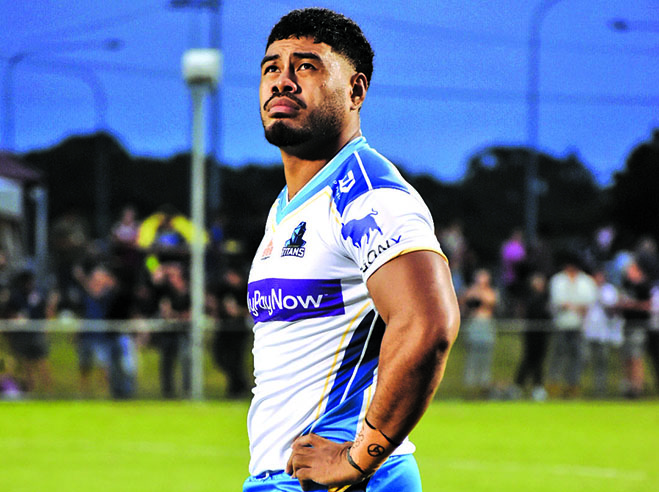 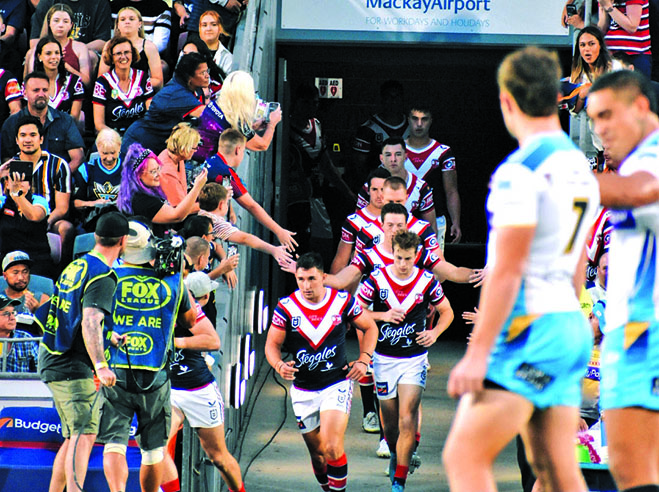 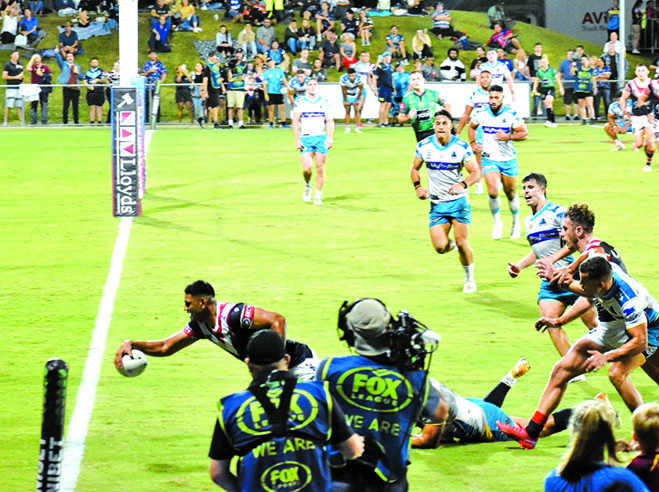 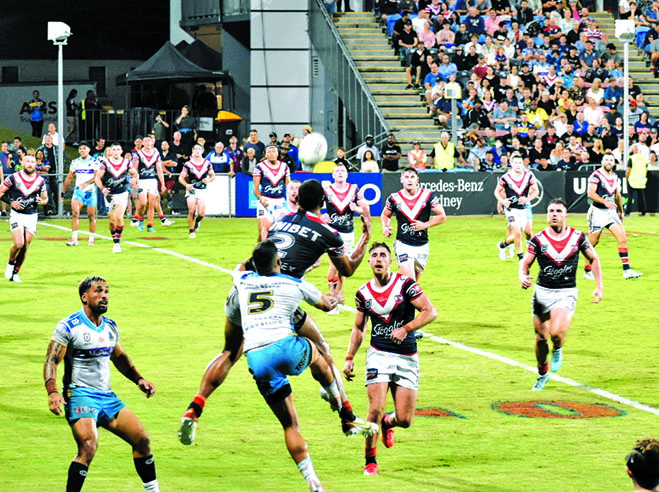 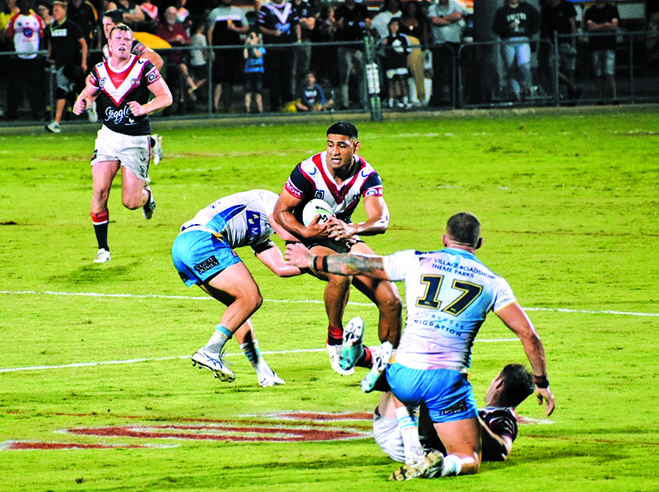 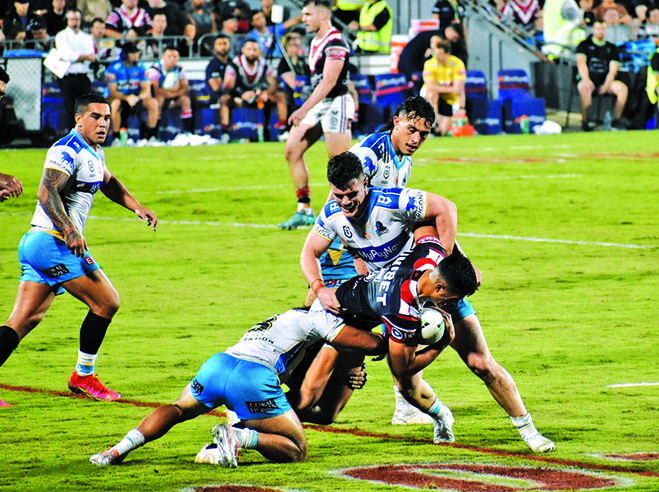 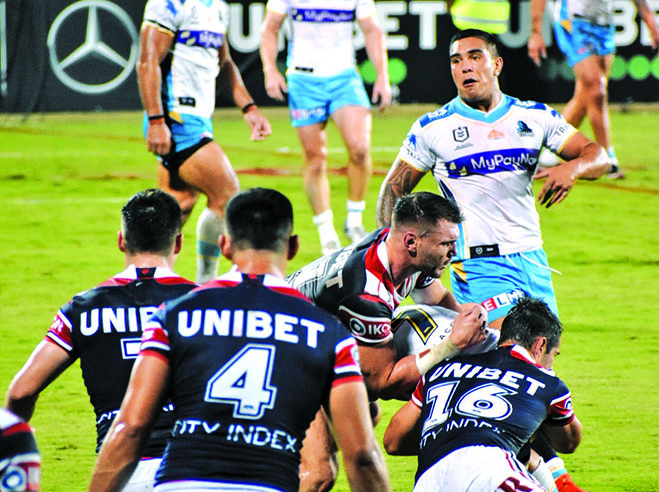 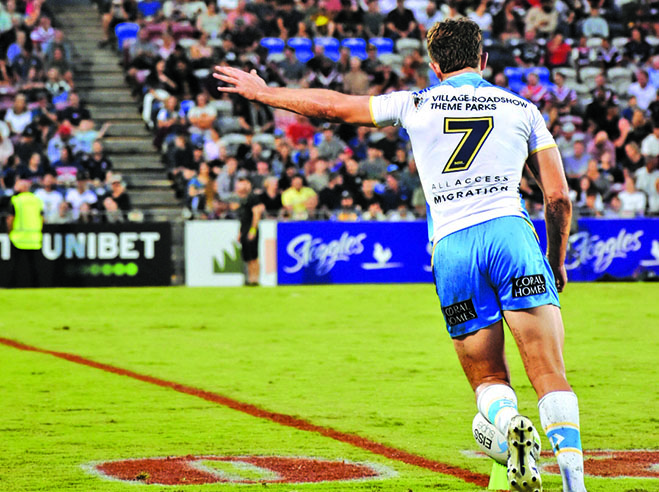 A vocal crowd of 5,527 packed out BB Print Stadium to watch the Sydney Roosters take on the Gold Coast Titans in Mackay’s only NRL match of 2022.

The Roosters looked right at home at the stadium they described as their “second home” after enjoying two big wins there in 2021, the cool and overcast Mackay weather making for rugby league conditions you might expect in the NSW capital.

The Titans were the first to score in only the fourth minute, with Beau Fermor diving on a loose grubber from Will Smith to lead 4-0 early.

The Roosters hit back immediately with James Tedesco being the beneficiary of a skilled offload from Joseph Manu, crossing the line for his 100th NRL try and taking the Roosters to a 6-4 lead.

The Roosters found themselves down to 12 men early with Lindsay Collins sin-binned for a head high tackle on Corey Thompson.

It didn’t faze the tri-colours as their fullback and captain found his own way through the Titans’ left edge defence once again for his second try of the night.

The last 15 minutes of the half saw a barrage of attack from the Roosters, the Titans eventually giving way for Joseph Suaalii to score on that same edge.

Another try soon after extended the Roosters’ lead as Siosiua Taukeiaho crossed in the same corner.

A fortunate rebound from another Will Smith grubber saw the Titans hit back before halftime, with Sam Lisone collecting the ball and crossing next to the posts.

With the score 24-10 at halftime, the Titans could sense a comeback and started the second half with an intensity that eventually boiled over to a Herman Ese'ese try, shortening the margin to eight points.

The Roosters then found their first try of the second half thanks to a soaring Daniel Tupou on the end of a Luke Keary bomb in the 61st minute.

Four minutes later, James Tedesco completed his hat-trick in probably his best game of the season, bringing the score to 34-16 with 13 minutes left.

A fatigued Titans defence was unable to withstand any more pressure, with Daniel Tupou scoring his 2nd try of the night and Joseph Suaalii doing the same in the opposite corner, all in the last five minutes.

Sam Walker was also red hot with the boot, battling the Mackay breeze to kick over five goals and Paul Momirovski one to bring the final score to 44-16.

The Roosters showed appreciation to the vocal Mackay crowd, meeting fans after the game and kicking footballs into the crowd.

Both teams are in Brisbane this weekend for Magic Round, with the Roosters to take on the Eels and the Titans coming up against the Dragons.

Are You Good At Magic Tricks?
Gardian Property Point
Your Year To Volunteer