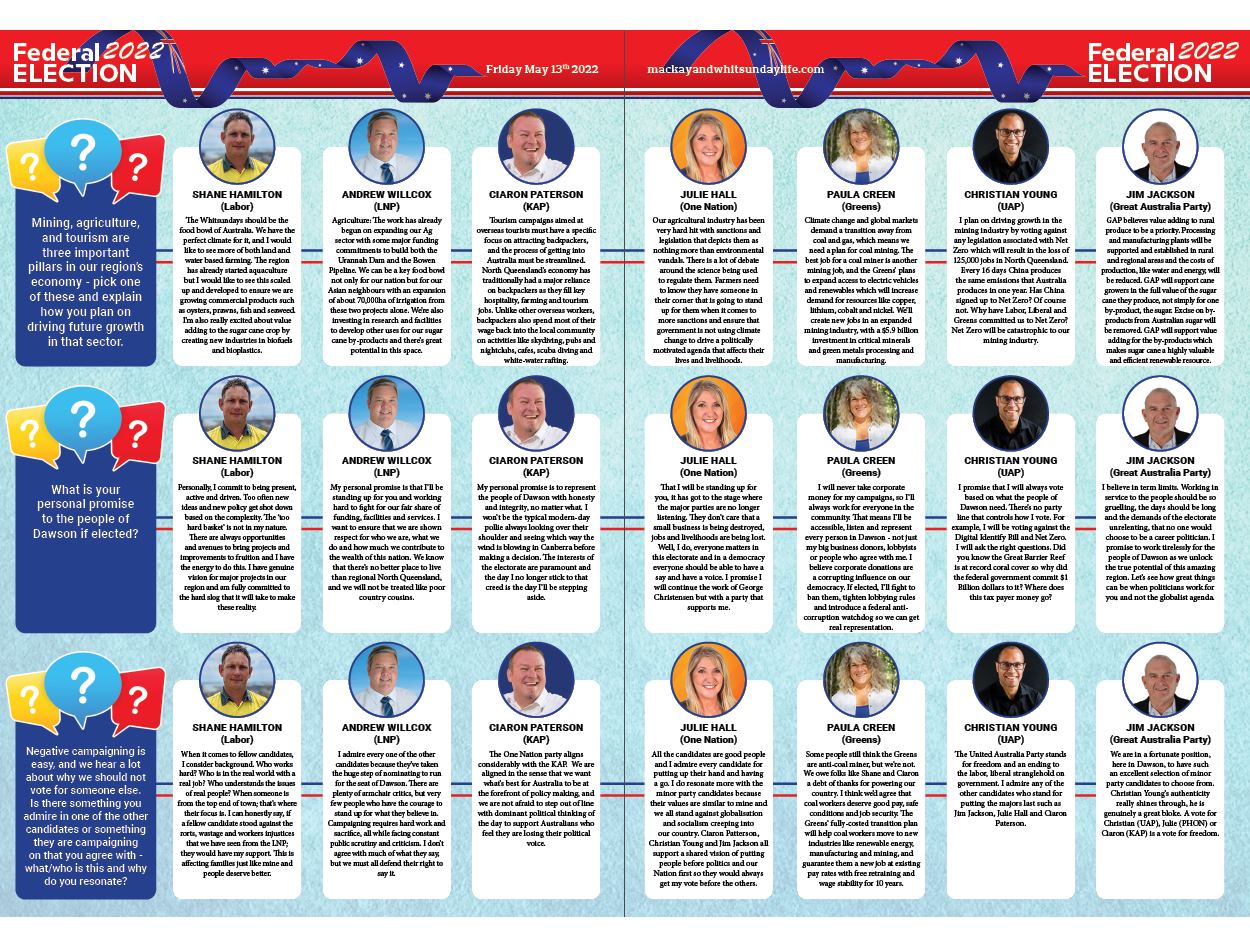 Mining, agriculture, and tourism are three important pillars in our region’s economy - pick one of these and explain how you plan on driving future growth in that sector.

The Whitsundays should be the food bowl of Australia. We have the perfect climate for it, and I would like to see more of both land and water based farming. The region has already started aquaculture but I would like to see this scaled up and developed to ensure we are growing commercial products such as oysters, prawns, fish and seaweed. I'm also really excited about value adding to the sugar cane crop by creating new industries in biofuels and bioplastics.

Agriculture: The work has already begun on expanding our Ag sector with some major funding commitments to build both the Urannah Dam and the Bowen Pipeline. We can be a key food bowl not only for our nation but for our Asian neighbours with an expansion of about 70,000ha of irrigation from these two projects alone. We're also investing in research and facilities to develop other uses for our sugar cane by-products and there's great potential in this space.

Our agricultural industry has been very hard hit with sanctions and legislation that depicts them as nothing more than environmental vandals. There is a lot of debate around the science being used to regulate them. Farmers need to know they have someone in their corner that is going to stand up for them when it comes to more sanctions and ensure that government is not using climate change to drive a politically motivated agenda that affects their lives and livelihoods.

I plan on driving growth in the mining industry by voting against any legislation associated with Net Zero which will result in the loss of 125,000 jobs in North Queensland. Every 16 days China produces the same emissions that Australia produces in one year. Has China signed up to Net Zero? Of course not. Why have Labor, Liberal and Greens committed us to Net Zero? Net Zero will be catastrophic to our mining industry.

Climate change and global markets demand a transition away from coal and gas, which means we need a plan for coal mining. The best job for a coal miner is another mining job, and the Greens’ plans to expand access to electric vehicles and renewables which will increase demand for resources like copper, lithium, cobalt and nickel. We’ll create new jobs in an expanded mining industry, with a $5.9 billion investment in critical minerals and green metals processing and manufacturing.

Tourism campaigns aimed at overseas tourists must have a specific focus on attracting backpackers, and the process of getting into Australia must be streamlined. North Queensland’s economy has traditionally had a major reliance on backpackers as they fill key hospitality, farming and tourism jobs. Unlike other overseas workers, backpackers also spend most of their wage back into the local community on activities like skydiving, pubs and nightclubs, cafes, scuba diving and white-water rafting.

GAP believes value adding to rural produce to be a priority. Processing and manufacturing plants will be supported and established in rural and regional areas and the costs of production, like water and energy, will be reduced. GAP will support cane growers in the full value of the sugar cane they produce, not simply for one by-product, the sugar. Excise on by-products from Australian sugar will be removed. GAP will support value adding for the by-products which makes sugar cane a highly valuable and efficient renewable resource.

What is your personal promise to the people of Dawson if elected?

Personally, I commit to being present, active and driven. Too often new ideas and new policy get shot down based on the complexity. The ‘too hard basket’ is not in my nature. There are always opportunities and avenues to bring projects and improvements to fruition and I have the energy to do this. I have genuine vision for major projects in our region and am fully committed to the hard slog that it will take to make these reality.

My personal promise is that I’ll be standing up for you and working hard to fight for our fair share of funding, facilities and services. I want to ensure that we are shown respect for who we are, what we do and how much we contribute to the wealth of this nation. We know that there’s no better place to live than regional North Queensland, and we will not be treated like poor country cousins.

That I will be standing up for you, it has got to the stage where the major parties are no longer listening. They don’t care that a small business is being destroyed, jobs and livelihoods are being lost. Well, I do, everyone matters in this electorate and in a democracy everyone should be able to have a say and have a voice. I promise I will continue the work of George Christensen but with a party that supports me.

I promise that I will always vote based on what the people of Dawson need. There’s no party line that controls how I vote. For example, I will be voting against the Digital Identify Bill and Net Zero. I will ask the right questions. Did you know the Great Barrier Reef is at record coral cover so why did the federal government commit $1 Billion dollars to it? Where does this tax payer money go?

I will never take corporate money for my campaigns, so I’ll always work for everyone in the community. That means I’ll be accessible, listen and represent every person in Dawson - not just my big business donors, lobbyists or people who agree with me. I believe corporate donations are a corrupting influence on our democracy. If elected, I’ll fight to ban them, tighten lobbying rules and introduce a federal anti-corruption watchdog so we can get real representation.

My personal promise is to represent the people of Dawson with honesty and integrity, no matter what. I won't be the typical modern-day pollie always looking over their shoulder and seeing which way the wind is blowing in Canberra before making a decision. The interests of the electorate are paramount and the day I no longer stick to that creed is the day I'll be stepping aside.

I believe in term limits. Working in service to the people should be so gruelling, the days should be long and the demands of the electorate unrelenting, that no one would choose to be a career politician. I promise to work tirelessly for the people of Dawson as we unlock the true potential of this amazing region. Let’s see how great things can be when politicians work for you and not the globalist agenda.

Negative campaigning is easy, and we hear a lot about why we should not vote for someone else. Is there something you admire in one of the other candidates or something they are campaigning on that you agree with - what/who is this and why do you resonate?

When it comes to fellow candidates, I consider background. Who works hard? Who is in the real world with a real job? Who understands the issues of real people? When someone is from the top end of town; that’s where their focus is. I can honestly say, if a fellow candidate stood against the rorts, wastage and workers injustices that we have seen from the LNP; they would have my support. This is affecting families just like mine and people deserve better.

I admire every one of the other candidates because they've taken the huge step of nominating to run for the seat of Dawson. There are plenty of armchair critics, but very few people who have the courage to stand up for what they believe in. Campaigning requires hard work and sacrifice, all while facing constant public scrutiny and criticism. I don't agree with much of what they say, but we must all defend their right to say it.

All the candidates are good people and I admire every candidate for putting up their hand and having a go. I do resonate more with the minor party candidates because their values are similar to mine and we all stand against globalisation and socialism creeping into our country. Ciaron Patterson, Christian Young and Jim Jackson all support a shared vision of putting people before politics and our Nation first so they would always get my vote before the others.

The United Australia Party stands for freedom and an ending to the labor, liberal stranglehold on government. I admire any of the other candidates who stand for putting the majors last such as Jim Jackson, Julie Hall and Ciaron Paterson.

Some people still think the Greens are anti-coal miner, but we’re not. We owe folks like Shane and Ciaron a debt of thanks for powering our country. I think we’d agree that coal workers deserve good pay, safe conditions and job security. The Greens’ fully-costed transition plan will help coal workers move to new industries like renewable energy, manufacturing and mining, and guarantee them a new job at existing pay rates with free retraining and wage stability for 10 years.

The One Nation party aligns considerably with the KAP.  We are aligned in the sense that we want what's best for Australia to be at the forefront of policy making, and we are not afraid to step out of line with dominant political thinking of the day to support Australians who feel they are losing their political voice.

We are in a fortunate position, here in Dawson, to have such an excellent selection of minor party candidates to choose from. Christian Young’s authenticity really shines through, he is genuinely a great bloke. A vote for Christian (UAP), Julie (PHON) or Ciaron (KAP) is a vote for freedom.

Who Will Get Your Vote?
Mackay Hockey Scores Big With $200K Pledge For Clubhouse
You Could Soon Unlock Superannuation For A House Deposit