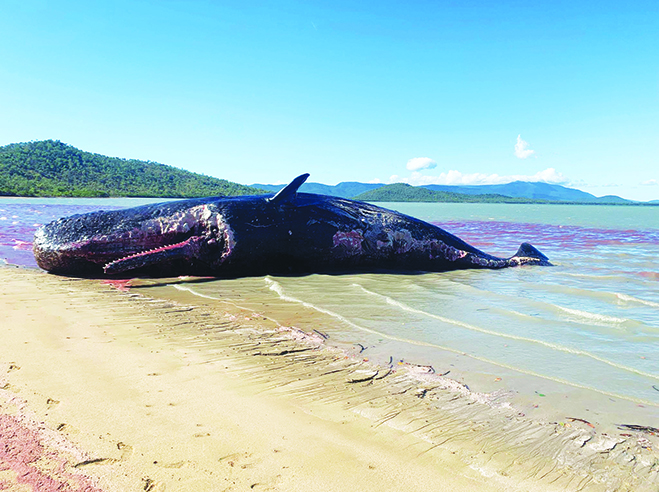 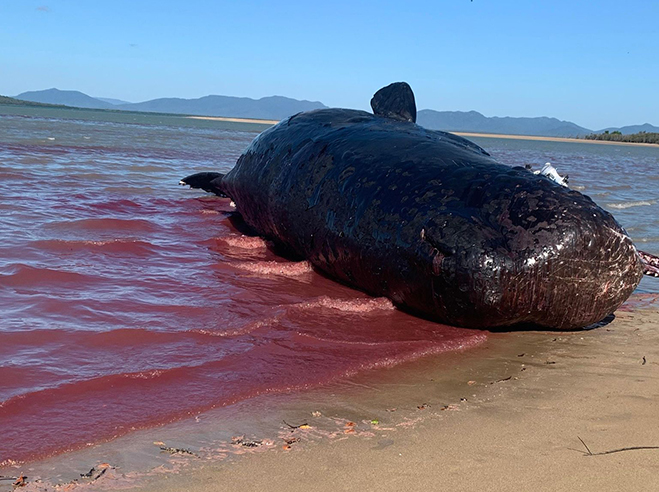 A SAD START TO THE WHALE SEASON

The whale carcass located close to the mouth of Billy Creek south of Bowen has caused a stir amongst the region’s residents who raised theories why a Sperm Whale was found not just in Whitsunday waters, but so close to shore.

Whales are a common sight in the region’s waterways from May to September as Humpbacks migrate in the thousands up the Australian coast from Antarctica to birth their calves in warm waters – but not Sperm Whales.

Local expert and Master Reef Guide, Crystal Lacey said that although this species are uncommon sights in the Coral Sea, largely because they are solitary animals that do not breach, it does not mean they are not there.

“Sperm Whales can be seen all around the Australian coastline, including the Great Barrier Reef and amongst the Whitsundays with at least one sighting every few years,” she said.

“Although this is a sad ending for this particular whale, it is all part of the circle of life and an extremely rare occurrence within the Great Barrier Reef Whitsundays region.”

The whale is now slowly decomposing on the beach and the Department of Environment and Science are reminding people to stay away from the site at this time, in particular to avoid the water as both sharks and crocodiles are present in large numbers.

Ms Lacey said it’s uncertain what will happen to the carcass, but that it is likely to be left where it is.

“Depending on the state of the deceased whale, it may be taken to a secluded location for the natural process to continue, uninterrupted by people,” she said.

“However, once a large whale like a Sperm Whale is beached, it is extremely hard to move off the sand. Other options are to bury, however there is no distinct decision at such time.”

The last event of this kind occurred in the Whitsundays in 2016 when a Minke Whale washed up near North Queensland Cruising Yacht Club in Bowen.

On that occasion the Whitsunday Regional Council buried the mammal.

A stranded whale dies on a Whitsunday sandbank