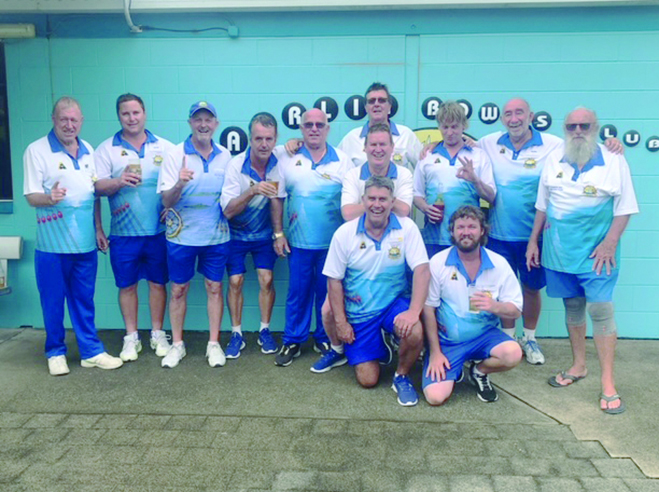 Wednesday afternoon bowls saw a brilliant return from Rick Galea who did a great job organising the day and the stand out winners, skippered by Chairman Ash Warland, were Alan Pershouse at lead and new member Jason Dominiak at second showing fantastic skills, with Col Morris winning the Health Hub voucher.

However, the big winners of the night was the popular team of Woolies Allsorts against a gallant Whitsunday Gold Coffee’s B team.

Saturday morning saw the start of the Men’s Pennants teams with Airlie Beach fielding four teams. Having won Division Two last year, our boys started in Division One and they were not disgraced winning two rinks against Mackay Bowls Club.

They won the third rink by a big margin which saw them become overall winners 4 to 2.

On Sunday the team beat the highly fancied Northern Beaches to win all rinks 89 to 43 and gain 6 points to be in second position.

Division 4 beat RSL Memorial on Saturday 39 to 22 for 5 points but sadly lost to Souths Suburban 55 to 19 on Sunday.

Division 5 played Mackay City at home on Saturday 42 to 30 for a 5-0 points win and on Sunday at St Helen’s there was a great team win with all players in sensational form winning 43 to 19 and another 5 - 0 win.

Contributed with thanks to Mark Mawson.