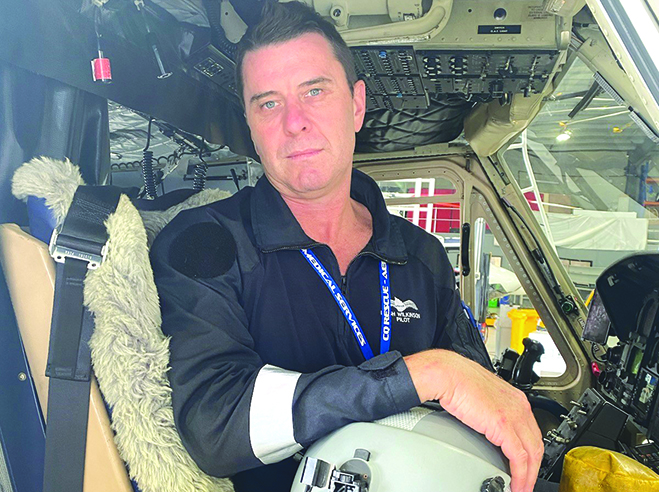 The death of three people on the region’s roads in a 37-hour period last weekend was indicative of a horror increase in a spate of tragic road accidents this year, RACQ CQ Rescue pilot Leigh Wilkinson said.

RACQ CQ Rescue was tasked last Friday afternoon to a fatal motorcycle accident on the Bruce Highway at St Lawrence which claimed the life of a 50-year-old man. Initial investigations by Police suggest the rider was travelling along the Bruce Highway just before 5pm when he lost control and crashed into a barrier on the side of the Heifer Creek bridge.

Less than two days later on Mother’s Day there were two more fatalities within an hour of each other in two separate incidents.

Jacob Betts from Dysart died following a traffic crash at Racecourse in Mackay. Police reported that initial investigations indicate at approximately 5.05am a motorbike and Toyota Corolla have collided at the intersection of Horse and Jockey Road and Meadowlands Road. The 24-year-old motorcyclist died at the scene.

Shortly after, a 27-year-old man was located deceased on the roadway on Sarina Beach Road near Grasstree Road. Jordan Blanch suffered critical injuries and died at the scene. The vehicle believed to have hit Mr Blanch did not remain at the scene. Police urge anyone who may have witnessed the incident or who has dashcam footage in the area at the time to come forward.

Prior to these tragedies, on Easter Monday, a 19-year-old woman was airlifted to Townsville after the motorcycle she was a pillion passenger on was hit by a car doing a u-turn on the Bruce Highway near Koumala. Her 60-year-old father died at the scene and the young woman later died in hospital.

RACQ CQ Rescue also transferred a 12-year-old boy to hospital in Mackay after a horror head-on smash between two cars at Gregory River a week ago. The boy’s twin brother died in the accident and their mother was taken to Proserpine hospital by ambulance.

Mr Wilkinson said all fatalities and serious injuries on the region’s roads were “enormously tragic”.

“For everyone who dies there are a huge amount more who are terribly injured,” he said.

“The reality of being in a car crash is a terrifying experience if you are seriously injured. The path to recovery is often very long and painful, sometimes taking years.

“You are in serious pain. Your clothes will be cut off and you will be terribly frightened and traumatised. You really don’t want to be that person. There is the chance of permanent disability. People can have spinal injuries and they’ll have ongoing treatment for the rest of their lives.”

Mr Wilkinson said the rescue chopper crew were also impacted by the horror scenes they witnessed.

“Once I became a parent, going to incidents with young children became a lot harder to process,” he said.

“Memories and flashbacks, fatigue, mood swings can go on for a week while you process what you have been to. Adults can sometimes make poor choices, but children just don’t have a choice in the decisions that can ultimately change lives in a split second.”

Working in a regional area meant he and his colleagues could sometimes know the people they treated at crash scenes or their family.

“It really weighs on your mind. It definitely makes it harder if you have a personal connection,” he said.

“Please be careful on our roads. We really don’t want to meet you or your loved ones by accident.”“The reality of being in a car crash is a terrifying experience if you are seriously injured. The path to recovery is often very long and painful, sometimes taking years.”

“For everyone who dies there are a huge amount more who are terribly injured.”