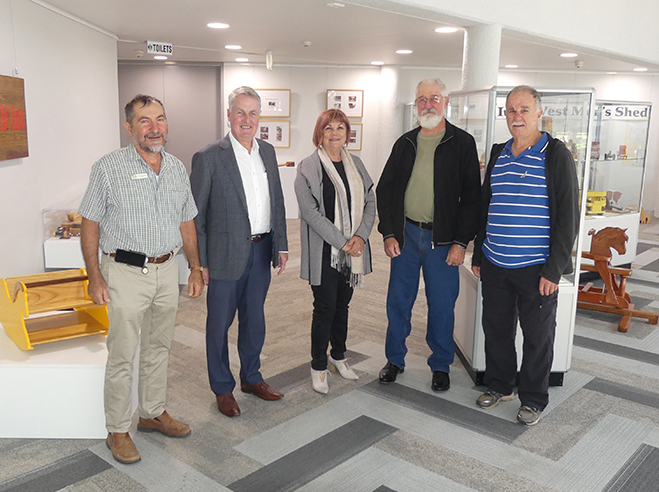 Men’s Sheds from across the region kicked off Men’s Health Week with a display of man-made handiworks in the Jubilee Community Centre.

The works are inspired by the 2022 Men’s Health Week theme, “building healthy environments for men and boys”, which is what Allen Grant from Iona West Men’s Shed said they strive to do.

“We build a lot of projects, so we try to encourage men to come,” Mr Grant said.

“There’s a lot of men who have a lot of talents out there and they finish work and then the talents disappear.”

“Nurses come down and talk to the guys about how to look after themselves – we find it’s very positive for guys to come down,” Mr Grant said.

“You don’t have to come and do all these jobs; you can come and have a cup of coffee and talk to the guys.”

Pointing to his heart and his head, Mr Grant said, “It does you good in here and good up here that you’re volunteering and giving something back to the community.”

Rob Foot of Mackay Men’s Shed has been retired for six years and involved in Men’s Sheds for five of those and specialises in carving walking sticks and fishing lures.

“I have an absolute ball,” Mr Foot said.

“Other people go along just to have a cup of tea or coffee with their mates.

“There’s all walks of life, from doctors down to labourers, and we’re all as one, shoulder to shoulder, and they do a very good job in society.”

Men’s sheds are available to people 18 and over and Rob said he’s seen many examples of troubled youth work alongside Men’s Sheds to get their lives back on track.

“We’ve fostered them along and you see them six months down the track on the right track and going well within society,” he said.

“When you think about the stats, they’re quite alarming,” Mr Williamson said, referring to the fact that women outlive men by about five years.

The three leading causes of death in men are cardiovascular disease, motor vehicle accidents and suicide.

“We, as a community, can do something about and we should,” Mr Williamson said.

“Men’s sheds are really important and help to get guys back out into an activity that they probably thought they didn’t have much interest in before.”

“When you see what the men’s sheds are producing today and how they actually work as a networking environment for people in our community, it’s a fabulous thing.”

“The organisations that actually invite you along and say ‘hey, tell us your story,’ it tends to get people to open up,”

“If blokes can learn to talk about their problems, then perhaps we can drive the suicide rate down.”

Reach out to your local Men’s Shed to find out more about getting involved.

Today is your last chance to see the display at the Jubilee Community Centre, located in the council’s Civic Precinct area on Gordon Street.